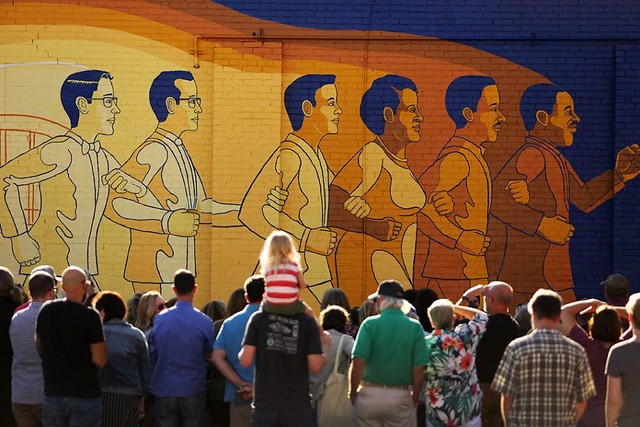 Click the image above to view this photo gallery.

A new mural in Casper, Wyoming, honors the life and legacy of native son James Reeb, a Unitarian minister, civil rights activist, and Princeton Theological Seminary alumnus, Class of 1953. It brings his story of bravery and compassion to his hometown where, surprisingly, he is relatively unknown despite being a central figure in the civil rights movement.

In 1965, Reeb switched on the evening news in his home in Boston where he worked with a housing program focused on desegregation. What he saw was unimaginable: violence from the Alabama state police descended on hundreds of African Americans planning to march from Selma to Montgomery to demand the right to vote. He felt compelled to act, especially when Rev. Martin Luther King, Jr. sent a telegram calling on clergy to come to Selma to march. So, he boarded a plane.

At that time, civil rights activists – white or black – weren’t welcome in Selma or many of its establishments. So, when he stopped in town for a meal with Rev. Orloff Miller and Rev. Clark Olsen, they went to Walker’s Cafe, a black-owned restaurant. After dinner, they set off on foot toward Brown Chapel AME Church, where King was expected to speak. But they were met with vitriol from white locals, who followed and attacked them. Reeb died two days later at age 38. His murderers were charged, tried, and acquitted by an all-white, all-male jury.

“I was amazed by that fact that his story was not very well known in Casper,” says Libby Tedder Hugus, pastor at The Table and mural project coordinator. “Specifically, there wasn’t much in the way of public memorial space or storytelling about his life.” At the same time, local Casper artist Tony Elmore had a vision for the Casper Mural Project, a concentrated zone for art and murals in the town. “We got a team together and realized the Reeb story would be a great kickoff to the creation of that zone,” Hugus says, especially as it would provide a public venue for his story, instead of one that’s tucked away in a museum.

On August 28, 2019, the Rev. James Reeb Memorial Mural was revealed in downtown Casper. It depicts six civil rights marchers, arm in arm: Rev. Reeb, along with Rev. Dr. Martin Luther King, Jr., Jimmie Lee Jackson, Annie Cooper, Rev. Orloff Miller, and Rev. Clark Olsen, all chosen for their roles – direct or indirect – in the march from Selma to Montgomery. Following each marcher is a wake.

“What we see in Reeb’s wake is scenes from his life, but also representations of the kind of person he was, and how he cared so deeply in practicing empathy and compassion for his neighbors and living out his faith in such a practical and integrated way,” Hugus explains. “There’s so much more to his story than his tragic death.”

The response from the community has been overwhelmingly positive. On the evening of the unveiling, over 200 community members stopped to see the mural, and 150 of them stayed for a panel discussion with Reeb’s granddaughter, Leah Reeb Varela, Wyoming author Ammon Medina, and Chip Brantley and Andrew Beck Grace, investigative journalists and co-hosts of NPR’s White Lies Podcast, who returned to Selma to further investigate Reeb’s murder.